Medium resolution satellite images give us the chances to see how humans reshape the world. The publicly available dataset CCI-LC (Climate Change Initiative Land Cover), based on satellite images of the European Space Agency, offers a detailed look on our planet’s surface and how it has changed from 1992 to 2015. The great achievement of this project is its high temporal consistency, which enables the comparison of land cover distributions over time. The most pressing issues we can tackle with the data is how our species is affecting its environment and the changing ecosystems. IPBES (Intergovernmental Science-Policy Platform on Biodiversity and Ecosystem Services), an intergovernmental body established by the United Nations that is dedicated to provide policymakers with an objective view on the state of our World’s ecosystems and biodiversity, just published a report, which concludes that we are facing a serious biodiversity crisis. Over one million species are threatened by extinction. One of the major reasons for the critical condition of our planet’s biodiversity is the loss of natural habitats (Díaz et al. 2019). The CCI-LC dataset enables us to explore the connection between human activities and land cover changes on a larger scale, which will help us to protect and restore healthy ecosystems. Changes in the ecosystem can be the result of different factors. In order to draw real conclusions, we must carefully choose a mode of inference that identifies the effect of human activities. I have chosen a research strategy called regression discontinuity design. Hereby I look at state borders, focusing on how the distribution of land cover changes over time. This will allow me to estimate the average impact of policies and socioeconomic changes (e.g. more livestock farming or an increase in GDP on changes in land cover).

In my thesis I want to look at savannahs and grasslands at a broader scale and investigate connections to socioeconomic developments. It is important to understand how we influence ecosystems to take action against the loss of natural habitats. In 2015 according to the CCI-LC data set around 10 percent of land area worldwide was covered by grassland, while forests covered around 35 percent, sparsely vegetated and barren area 25 percent and agricultural area 18 percent. The remaining 12 percent are made up of 10 percent shrubland, 1.5 percent wetlands and 0.5 percent settlements. Considering that grasslands also occur in the form of savannahs and agricultural areas, these types of ecosystems are certainly among the most widespread in the world. The Food and Agriculture Organization of the United Nations estimates that, depending on the definition, between 20 and 40 percent of the land area is grassland. These areas contribute to the livelihoods of more than 800 million people. They are a source of food, a habitat for a wide variety of wildlife, and they store carbon and water (Panunzi 2008). They thus play a fundamental role in the protection of our waters and in the fight against climate change. A report by the IPBES concluded that we’ve reached a critical point at which one million species are threatened by extinction because of the disappearance of natural habitats (Díaz et al. 2019). However, we are not only losing unique species and ecosystems, but we are also losing a piece of human history. The upright walk, the domestication of animals, the use of crops, and many other evolutionary steps that we have gone through on our way to the modern era are connected to the African savannah. To protect these precious sites, we need to understand how we can protect these habitats from the encroachment of woody plants and from desertification.

Case studies suggest that grasslands can respond very quickly to changing conditions, making them vulnerable to land-use shifts and the effects of the climate change. The CCI-LC dataset allows us to study the changing distribution of grassland and the impact of socioeconomic developments on an international or global scale. Many publications suggest that a large part of grasslands, especially in tropical areas, are in a sensitive equilibrium. These landscapes are characterized by the constant battle between grass vegetation and woodland. The existence of tropical and subtropical savannah ecosystems, characterized by a closed herb layer and an open layer of shrubs, depends on two factors:  on one side the population of trees and bushes must be kept within limits, and on the other side deserts cannot continue to expand. Humans are suspected to have a decisive influence on both developments. As a result of livestock farming, the extermination of large herbivores, and changes in fire regimes, we influence the spread of woody plants in these ecosystems. At the same time, man-made climate change and destructive land use practices are a driving force of desertification. However, these are hypotheses and we cannot yet say exactly how we can ensure the survival of these precious ecosystems. The CCI-LC dataset offers us a new source of information to better understand the effects of human action. Compared to other global land cover datasets, the information from the CCI-LC show higher spatio-temporal consistency which offer a better framework to investigate land cover changes. We can use the dataset to compare land cover distributions over 23 years and investigate patterns that hopefully give us useful insights for the conservation of these ecosystems. 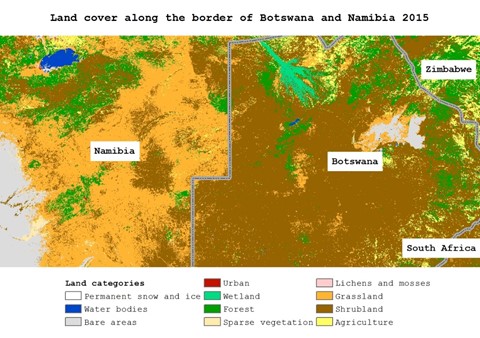 In satellite images, we can see changes in the landscape and investigate how different types of land cover are distributed. Sometimes conspicuous patterns are visible which can reveal how the influence of people changes the landscape. Taking a look at the border between Namibia and Botswana, we can see how grassland dominates the land on the Namibian side, while shrubland prevails on the side of Botswana. The abrupt change of the land cover that coincides with this administrative border suggests a relationship. However, the question is whether the demarcation of the border was influenced by the landscape, or whether the different institutional and social realities affected the land cover. If the natural environment has not played a role in defining the border, then such a pattern is probably the result of the specific socio-economic and legal reality in the country. The changes in land cover along the border could therefore be used to study the impact of institutional differences on the Earth’s surface. The Repressive colonial regimes randomly assigned people and areas to administrative units on the African continent. Around 80 percent of the state borders are based on meridians or parallels and have no relation to the population or the natural environment (McCauley and Posner, 2015). Therefore, they lend themselves to study the impacts of artificial borders on the environment, examine cross-country differences, and the effects of jurisdictions and policies. This kind of research design, which relies on the arbitrariness of a border, is also called a regression discontinuity design. It is seen as a form of quasi-experiment and a very robust method to study cause and effect without conducting a real experiment. In this case each pair of states along a border would be interpreted as a treatment and a control group. The question that I want to tackle with this method is how economic and social developments influence the expansion of grasslands. Do the data from the satellite images indicate the spread of deserts and is there a shift to more tree-dominated vegetation within the grassland/savanna forest complex? If these changes can be observed, then I would like to use the regression discontinuity approach to analyze if features of government systems influence these developments.  The analysis of land cover along administrative borders is a promising approach for that which can also be applied to other issues. Especially with constantly improving data sets, the number of research questions that can be addressed with this method continues to increase.

All images author’s own.