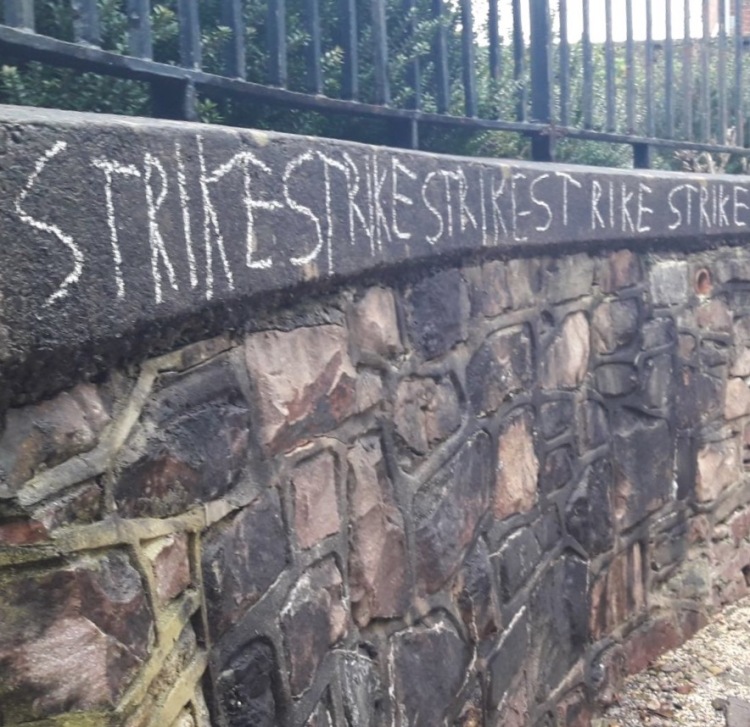 The following is a reflection on an artefact of political discourse (and more) that formed one action among many during the recent strikes against pension cuts (and more). It is partial and subjective and I hope it will become one vignette among many in the rich tapestry made possible by the extra-ordinary and politicised space and time of the striking university.

The artefact in question is a mock-up and response to an email sent by the Vice Chancellor shortly before the first week of the strike (the timing is significant). By means of response, the Vice Chancellor’s email was annotated, printed and circulated around the university appearing early one morning scattered over the Geography common roomamong other communal spaces. I’ve included it as a link here it and again at the end of this article. Reading it beforehand, during or after this article are all valid.

Response to the Vice Chancellor’s Email

What forms do and did the politics of the strikes take? Who, what and where were the actors involved? What of their agency and inter-action? What was and continues to be at stake in the politicised ecology of the contemporary British university?

How were these issues politicised, agitated over, communicated and organised around? Importantly for the article at hand, what were some of the micro political interactions – ones perhaps subtle and overlooked – and how might they encourage us to think strike politics differently? In that vein, whilst beyond the current scope, this raises further questions such as; what sorts of demands might these micro political instances give rise to, how would they be recognised in relation to political discourses and how do they suggest a particular way of ‘being’ (and becoming) political?

These questions are rough reflections, drawn from mine and other student’s experience and involvement in the strike. They are theoretically inflected through the reading of Deleuze & Guattari, conceptions of micro and minoritarian politics, as well as non-representational and affect theory. In all these domains relationality and political subjectivity are central concerns. This brief article frames these through the oft overlooked yet vitally significant theme of communication by way of the aforementioned political action.

The document is rich with insight and fascinating for a number of reasons but I wish to draw attention to two aspects. The first is to consider the actual experience and act of responding. The second pertains to the content itself; a pertinent analysis and deconstruction of the political discourses that constitute the Vice Chancellor’s, and by extension management’s as a whole, communication with students.

The central theme these reflections revolve around is that of communication. What then are the types of politics made possible or conversely discouraged through forms of communication? In the process of communicating, how do we become particular politicised agents? What potential is there to fashion new or different subjectivities and how are we encouraged or how do we routinely perform and take up established ‘positions’ through our engagement in politics?

In understanding the response as an act of political communication, the reflection extends to the very materiality and experience of responding itself. This is all the more significant, given that the VC’s email forecloses and discourages any such response at all. The response was evidently improvised and enabled through an assemblage of digital technologies (emails, printers, scanners, photocopiers) and carried out with wilful cunning. I believe the response was distributed through libraries and other communal spaces of the university. A previously spaceless, although certainly temporally sensitive, communication (a sudden email with no return address sent by management, until then mute, late on a Friday afternoon immediately preceding the commencement of unprecedented industrial action) becomes part of an experiential interaction with the materiality of university space and its concomitant technologies of communication. Indeed, I imagine the very act of drafting such an (unsolicited) reply was formative for those involved. Furthermore, it opens up a space of political dialogue and a chance, however slim, of politicising communication, one prior to this thoroughly compromised by the Vice Chancellor’s email, which the students’ response so aptly deconstructs.

The Vice Chancellor’s mode of communication is constitutive of a political field (one of imposed positions, of inter-relations, of potential and constraint, politicisation and depoliticisation respectively). The Vice Chancellor’s communication is varyingly analysed as misleading, dishonest, careless, contemptuous towards striking staff and outright offensive to the intelligence of its readers. There is a deliberate attempt to depoliticise and dissuade students from engaging in strike politics. The question becomes then, how does management’s communication engender or constrain political possibilities? What sort of political subjectivities are formed through these exchanges? How is a political field of defined and easily recognisable positions established and how does the extra-ordinary space of the strikes allow for subversions of this?

If given a chance to confront the Vice Chancellor personally, what might one ask of him? What demand would one make? An appeal to honest and careful communication – that is communication full of care – is not a typical demand one includes in a manifesto or agenda when granted a platform. Greater care for communication however, may not only mitigate crises but provide the very foundations for (re)orienting ourselves and our political engagements. Management’s communication with staff and students is indicative of a much deeper crisis affecting academia. The schisms between the varying parties is symptomatic of this. However, if we were prepared to move beyond our (‘representation-able’) positions and if management were prepared to take genuine responsibility for its communication, then the (political) culture of the university might flourish. Importantly, I am not suggesting an absence of conflict, tension or disagreement. Such an absence is both undesirable and depoliticised. Rather I am alluding to a different type of politics altogether. I am not sure how one recognises such politics until one is actually engaged them. I am doubtful of the extent this is possible through conventional political channels (which is not to overlook the significance of many forms of bread and butter activism).

Without conclusion, the intention here is not to furnish answers. This commentary falls short of getting to grips with any of the questions posed. It is at best an attempt to pose different questions and offer imaginative reflections on those experiences subsumed under the ‘politics of the strike’. Perhaps the reflections are excessive and perhaps they fall short of anything substantial. Parting questions might include: what sort of politics are being enacted here and how? How are these overlooked in the context of nationwide demands and ‘neoliberal restructuring’? How can asking these questions foment novel forms of political engagement? With these in mind, consider the following article and ‘pull on the chancellor’s robes’.

Written by Stanley Connell-Longman. All opinions are those of the author. Contact: rc17575@my.bristol.ac.uk