The following guest blog is reposted with the author’s permission from the Gender and Feminist Geographies Research Group site (http://www.gfgrg.org/). It recounts Deirdre’s research interests in the geographies of detention in the immigration system, with a focus on critical feminist perspectives on ‘intimacy’. Deirdre recounts aspects of a talk given at Exeter University alongside Naomi Millner, Director of the Society and Space programme, as both reflected on broader dynamics of silencing and visibility connected with border economies.

Over the past few years I have been working on a project investigating ‘Intimate Economies of Immigration Detention’ in collaboration with Dr. Nancy Hiemstra (Stony Brook University, NY). The project critically interrogates the infrastructure and operation of immigration detention in the U.S. The U.S. immigration detention system is vast and expanding with substantial revenue generation and profit making for a wide array of private and public sector actors. The system has expanded 75 per cent since 2003, with 34,000 immigrants detained per day in over 200 detention facilities throughout the U.S.[1]  By comparison, in the UK, on average between 2,500 and 3,500 immigrants are detained daily and a total of 28,908 people were detained in 2016.[2]  When it comes to the economics of detention, a good deal of attention focuses on the ‘macro-level’ cost, that is the daily rate received by detention facilities from the federal government to house immigration detainees. This figure is $124 (£92.00) per day in the U.S. (The estimated average per day cost is £86.00 in the UK.) Our project, in contrast, focuses on additional ways that revenue and profit are generated from immigration detention. We trace and examine contracts and subcontracts in order to investigate what we describe as the micro-level, intimate economies of immigration detention. You can read about the project here, here, and here. 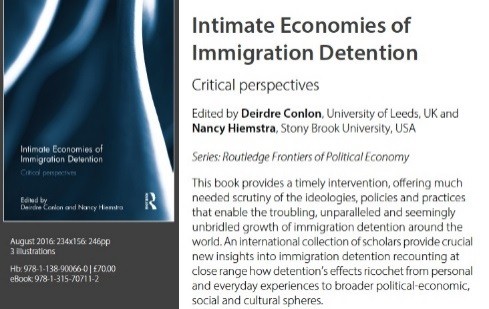 Recently, I presented some reflections from the Intimate Economies project at the Human Geography seminar series at the University of Exeter alongside a presentation by Naomi Millner from the University Bristol. I spoke about some of the frustrations and challenges of trying to get hold of and then decipher documents received using Freedom of Information Act (FOIA) requests to Immigration and Customs Enforcement (ICE), the division of federal government that administers the U.S. immigration detention system.[4]Even though the government is required to respond within 20 days of receiving a FOIA request, delays are all-too-common. In our case we were kept waiting 14 months before receiving a massive digital file that, in total, gave us a data set comprised of over 2,000 pages detailing the infrastructure and day-to-day operations of several detention facilities in the New York and New Jersey region.

Adding to our sense of frustration was the fact that almost 40 per cent of pages included redactions. This means that any/all information related to money, personnel, immigrant detainees, service providers as well as other contract and subcontract details are obscured or hidden. In effect, the intimate details about the operation of detention centers are rendered invisible. Efforts to discern who is involved in immigration detention (beyond ‘big name’ corporations such as GEO Group and CoreCivic in the U.S. or Serco and G4S in the UK), how money is made, and how profits are generated, are, effectively stymied and quite readily silenced by such redactions.

In her presentation Naomi Millner spoke about the ways participants are silenced in research and, reflecting on her broad based experience with participatory fieldwork, discussed the complexity of research relationships and efforts to ‘represent’ participants’ experiences. Naomi identified a number of principles that work toward countering the silencing that takes place in academic research. She called attention to listening, writing with the voices of others, attending to the more-than-human elements of exchanges, and voicing, in distinction from voices.

All in all this was an interesting and inspiring seminar and our presentations complemented one another in unexpected ways. Implicitly and explicitly our presentations demonstrated the significance of the ‘intimate’ in research. Both presentations also highlighted how ‘silencing’ registers as power in and across multiple domains, from relationships between the researcher and participants, to state dynamics and their effects. It also seemed apt that the seminar took place at a time when the ‘me too’ campaign has unveiled the silencing that besieges sexual harassment and assault within the public at large. This seminar, then, provided me with a timely opportunity to contemplate and critically reflect on silencing in research and in academia more broadly. Importantly, too, it affirmed how feminist perspectives can contribute to amplifying the challenges as well as alternative ways of producing knowledge and developing social relations where matters of intimacy and urgency are not silenced.

Note: These figures are for 2014. The average number of immigrants detained on a daily basis in the first few months of 2017 was 41,000; see D. Conlon (2017) Immigration enforcement, asylum and economic value in Trump’s first 100 days, Society and Space, July 4. http://societyandspace.org/author/deirdre-conlon/

[2] See The Migration Observatory (2017) Immigration Detention in the UK, May 2. http://www.migrationobservatory.ox.ac.uk/resources/briefings/immigration-detention-in-the-uk/. While the UK detention estate is small by comparison to the U.S. it is the largest in Europe, capacity has grown since the early 1990s, and it is largely privatized.

Dr Deirdre Conlon is based in the School of Geography, University of Leeds.