Cinema, thought of as an audiovisual encounter, can be capable of changing the way we think about our relationship with the world. More than simply functioning on a representational level to inform us about something (for example as documentaries would do), audiovisual encounters are capable of rupturing our habitual ways of sensing the world and in so doing attune us to something about the ways in which our thoughts, actions and habits are conditioned by our material and ideational milieu. I am currently working on a dissertation in which I hope to research in particular how ‘audio’ can add to the ‘visual’ aspect of films in provoking us into new ways of thinking; away from an anthropocentric modes of thought based on the idea of individual sovereign subjects thinking for themselves, films expose us to the ontological premise that thought is immanent in the audiovisual encounter itself.

The inspiration for this project came from watching the films of American director David Lynch. Widely acknowledged as being the architect of deeply strange and beguiling films that defy chronology and easy understanding, Lynch films consistently take unexpected and inexplicable turns and generally present events in an order that doesn’t always seem to make sense, even after repeated viewings. There are whole websites created by fans dedicated to analysing and shedding some light on what’s going on in his films (for example: http://www.mulholland-drive.net/home.htm). The thing that struck me in particular when watching his 2001 film Mulholland Drive was the way in which sound is used to great effect in generating a deeply unsettling tone to certain scenes that otherwise might have seemed fairly normal.

Take, for instance, the (in)famous diner scene near the start of the film:

From about 1:30 onwards in the above clip you can start to hear a faint droning, rumbling sound in the background, which grows in intensity until the scene’s climax at around 4:30. Upon my first viewing of the scene, and indeed still with subsequent viewings, I found it immensely uncomfortable to watch but without really knowing why. The scene doesn’t obviously fit in with the storyline and seems to eschew classic horror-movie tropes for generating a sense of unease, instead subtly using audio to produce something different to its traditional narrative-driven use. The sound here seems to create a powerful sense of indeterminacy – it creates an atmosphere where it seems like something could happen as the man recounts the story of his dream, but it doesn’t signpost the viewer towards a direct emotion or expectation: it’s power seems to lie in its ambiguity.

The diner scene amounts to what philosopher Gilles Deleuze (2013: 4) calls a “pure optical and sound situation”. What this phrase signifies is a type of film or individual scene, distinctive of modern cinema, where obvious narrative links between action and reaction are broken and thereby our normal ways of perceiving something are suspended. Paola Maratti (2008: 61) summarises this idea, saying that “purely optical and sound situations… surge up when links between actions are undone and when we, along with the character, are abandoned to what there is to see, to that which is too beautiful or too unbearable, not only in extreme situations but also in the smallest fragments of everyday life”. In other words, these are situations where regular sequences of action and reaction are suspended; we are left to experience the audiovisual image in and for itself. 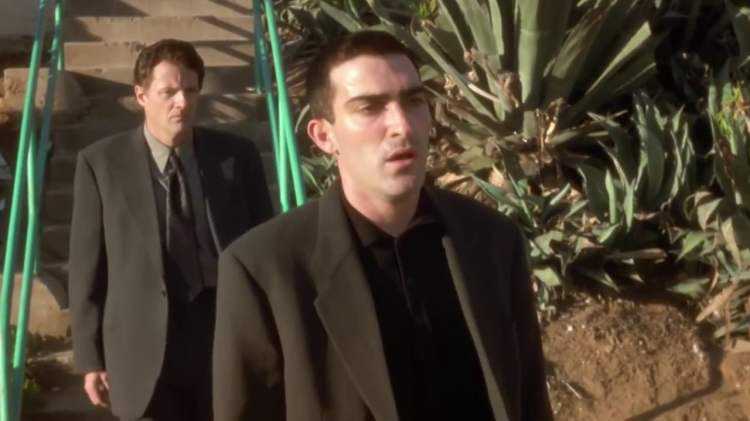 The power of this type of cinema for Deleuze, both in terms of its impact upon the viewer and in its use for his philosophical project more widely, lies in how moments of pure optical and sound situations expose the ways in which we habitually perceive and react to something by rupturing that process, pushing us into unique ways of thinking. These habitual, pre-figured ways of thinking and acting, or perceiving something, make up what Deleuze (2004: 129) calls the “dogmatic image of thought” – a series of assumed ‘facts’ about the nature of thought and perception, that condition how we experience the world. Pure optical and sound situations are therefore of interest to Deleuze as they suspend these modes of perception by pushing thought into an encounter with its own limit: the viewer is left to simply experience the audiovisual encounter without, or before understanding it as such.

Pure optical and sound situations therefore highlight the link between film and viewer as not being one of a viewer actively reflecting on what they are watching, but of the assemblage of viewer and film provoking perception: “the brain is the screen”, Deleuze says (in Flaxman, 2000: 365). Such scenes thereby provoke a new kind of perception, one that differs from the dogmatic image of thought by exposing the “system of values that clings to the very perception of things” (Maratti, 2008: 60), i.e. the ways in which we are habitually pre-figured into perceiving things in certain ways.

In other words, the genesis of thought and action do not lie within a cognizing human subject, but within the affective relations that make up the audiovisual encounter with the film. As a result then, this type of cinema gives us non-dogmatic images of thought through producing a kind of nonhuman perception: a perception of things not attached to, or determined by the viewer, but by the techniques and processes used in filming and editing. They are scenes of pure feeling rather than, or before, understanding. The diner scene from Mulholland Drive is so effective because of the way that it uses sound to rupture our habitual perceptions, our dogmatic image of thought, resulting in an unsettling atmosphere of ambiguity – we are left feeling tense because the dogmatic link between action and reaction that we are used to is broken by the subtle rumbling sound in the background making the scene somehow alien.

Why, then, is this important or even relevant for human geography? Following Deleuze, I argue that audiovisual images have ontological status – they are as equally a part of the plane of immanence from which thought and action emerge as anything else in the world. Images such as the diner scene from Mulholland Drive, in their impingement upon us, provoking us into into new sensibilities and perceptions, have the power to expose this link between humans and the world. Within experimentally leaning cinema such as this, “the link between humans and the world is always at stake” (Maratti, 2008: 80). In producing a kind of nonhuman perception, then, these images can themselves create non-dogmatic images of thought that depict thought and action as not ordered by a transcendental value, but immanent in the relations between us and our material and ideational milieu. If human geography is inherently about how humans relate with each other and their surroundings, faced with current sociopolitical and ecological crises it is imperative for us to re-think the nature of such relationships, in order to develop new ethical modes of living.

Flaxman, G. (2000). The Brain is the Screen: Deleuze and the Philosophy of Cinema. Minneapolis: University of Minnesota Press.