What can One Health do to/for Geography? Emboldening the More-than-Human Perspective in Health Geography

In the context of infectious disease, human and animal health have long been understood as intimately related, from Hippocrates’ recognition of environmental effects upon human health, through to the work of 19th century pathologist Rudolf Virchow, who created the field of comparative pathology,  championed the idea of ‘One Medicine’, and coined the term ‘zoonosis’ (Schultz 2008). The holistic ‘One Health’ approach took shape at a meeting hosted in New York by the Wildlife Conservation Society in 2004 at which the 12 ‘Manhattan Principles’ were adopted and branded as ‘One World One Health’. Whilst the concept of One Health has no stable definition (see Gibbs (2014 p87) for various institutional interpretations of the notion), the ideas behind it have been utilised in public health (for examples see Veterinarians without Borders (2010)) and have additionally begun to penetrate the social sciences (see for example Social Science and Medicine’s special issue on One Health in 2015). Whilst the ideas behind One Health may be “common sense,” Hinchliffe (2015 p34) warns against coupling a “one worldist metaphysics” with health and argues that those operating within the framework of One Health should be attentive to the local specificities of the production of healthy outcomes. This blog post discusses some ideas of what the notion of ‘One Health’ could do within the social sciences, briefly tracing some perspectives from biopolitics and political ecology and examples from my Masters and prospective PhD research.

Blue & Rock (2010 p355) propose the concept of trans-biopolitics to “emphasize that the bodies and lives at stake in contemporary times are multiple, manifold, more-than-human, and not easily contained by species-specific analytic frameworks.” Braun (2007 p7) further suggests considering the body “in terms of a global economy of exchange and circulation, where the body is thrown into a chaotic and unpredictable molecular world filled with emergent yet unspecifiable risks.” In the terms of an affirmative biopolitics in which “life and death, or finitude, are bound together indiscriminately” (Tierney 2016 p71) the communities experienced by the bodies at stake are more-than-human communities made up of humans, domestic animals, wildlife, and the very environment itself. The conditioning of these communities through power relations defined through a sense of ‘health’ has obvious importance for the management of disease, but what might this mean for social science research of health, and particularly infectious disease?

To borrow some perspectives from political ecology, King (2010 p38) points to a 2008 cholera outbreak in Zimbabwe that was described as “’man-made’ having been produced by the poorly maintained sanitation services and lack of clean water.” Mayer (2000 p943) argues that “the origin of resistant forms of TB are social and not merely medical,” and ties them to poverty and homelessness. Jackson & Neely (2014 p47, 48) present an overview of political ecology’s perspective of health as “in terms of nature-society relationships,” and of health and sickness as “more-than-human; they are an ecology.” When considered as more-than-human biopolitical provocations, perspectives such as these make demands of the concept of health that the One Health perspective can address. Considering health as more-than-human has both theoretical and practical implications for both the medical and social sciences. Health crises cease to be the domain of either doctors or veterinarians, and are instead the purview of doctors and veterinarians, along with ecologists and environmental health experts. For the social sciences, new questions can be raised over the formation and dissemination of health knowledges, the state of development of Foucault’s legacy in terms of biopower’s consideration of the flows of power affecting nonhumans (Srinivasan 2014), and the framing of spaces of inquiry into particular health issues. 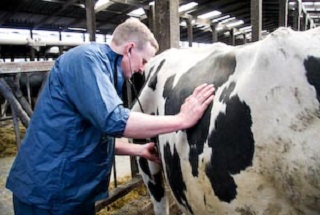 In my Masters thesis I began to explore these questions through the practices of farm and zoo veterinarians, distilling a position I referred to as a ‘more-than-human economy’ of One Health. In short, this built on the growing literature critiquing biopolitics’ anthropocentrism whilst probing the ways in which human and animal life are assessed as valuable and their subsequent relational role as stakeholders in antimicrobial resistance. In the context of infection, biosecurity, and antibiotic use: how is the health of dairy cows produced by veterinarians and farmers relative to species being conserved in a zoo by zoo veterinarians and zookeepers for example? Furthermore, how is their health conceived in relation to that of humans? Whilst the veterinarians interviewed generally agreed on prioritising human life in terms of preserving effective antibiotics, they differed among themselves on how to communicate the value of particular treatments (whether prescribing antibiotics or more systemic biosecurity changes) or understandings of the health of animals, and so exposed the biopolitical nuance of the relational ‘One Health’ consideration of antimicrobial resistance. When understood in the terms of One Health, this additionally brought to the fore Hinchliffe’s (2015) attention to local specificity in terms of differences between farmers, their productive farm environments, and conservation-attentive zoo environments.

As part of my PhD research I aim to undertake a survey and interview project to explore how the public situate themselves and their patterns of antibiotic use in the context of a more-than-human consideration of health. Whilst there is a significant amount of literature exploring the relationships between medical professionals and their patients on antibiotic use, and likewise for veterinarians and their clients, public understanding of the linkages between how they consume antibiotics, how their pets consume antibiotics, how livestock consume antibiotics, and beyond have not been so extensively investigated. Antimicrobial resistance is a multispecies problem, and more than that, it is an environmental problem. For the social sciences to do justice to the magnitude of the tasks ahead in addressing antimicrobial resistance they must be open to “new theoretical approaches – hybrid at times, clean-slate innovative at others – and new ways of seeing” when defining the scope of health challenges and decision-making (Scott et al 2012 p983). By integrating the notion of One Health into social scientific studies of health problems that present a clear more-than-human array of causes and effects, disciplines like health geography can adopt a forward-looking and adaptive approach to the growing challenges presented by infectious diseases and antimicrobial resistance to human, animal, and environmental health.

Scott, C. A., Robbins, P. F. & Comrie, A. C. (2012) The Mutual Conditioning of Humans and Pathogens: Implications for Integrative Geographical Scholarship. Annals of the Association of American Geographers, 102(5), 977-985.

Srinivasan, K. (2014) Caring for the collective: biopower and agential subjectification in wildlife conservation. Environment and Planning D: Society and Space, 32, 501-517.

Veterinarians without Borders (2010) One Health for One World: A Compendium of Case Studies.