Brexit… Trump… What would Spinoza do?

The MSc Society and Space programme has a strong emphasis on philosophy, which students apply to their analyses and understandings of society and the world. One philosopher who has remained particularly influential for me is Benedict de Spinoza. The following is a reflection, through the framework of Spinoza’s Ethics, on the political divisions unleashed by Brexit and Trump.

Note: The Ethics is a work of five parts, each broken down into a series of definitions (d), axioms (a), propositions (p), postulates (post.), scholia (s), and corollaries (c). Standard practice for citing the work uses a Roman numeral to denote the part, followed by the detail of which definition or proposition etc. is being referred to. All direct quotations are from the Edwin Curley translation.

The UK’s decision to leave the EU and the election of Donald Trump as President of the USA are the political shocks of 2016. In media commentary these two events are being compared, with some claiming that they express a similar political sentiment (Curtice, 2016; Harris, 2016). Indeed, Donald Trump himself referenced the result of the EU referendum in a campaign speech – “It will be called Brexit plus plus plus” (see Dearden, 2016 for clip). Whether this conflation is warranted or not is a discussion for another day, but both cases have seemingly brought to light hostility and sharp divisions within their respective societies, with each side of the debate unable to comprehend or accept the motivations of the other. It is with this in mind that I turn to Spinoza’s Ethics. The understanding of social processes and human psychology put forward in the Ethics teaches us, Spinoza claims, “to hate no one, to disesteem no one, to mock no one, to be angry at no one, to envy no one” (II p49s). Thinking about a response to political discord and enmity then, what can Spinoza tell us about Brexit and Trump? 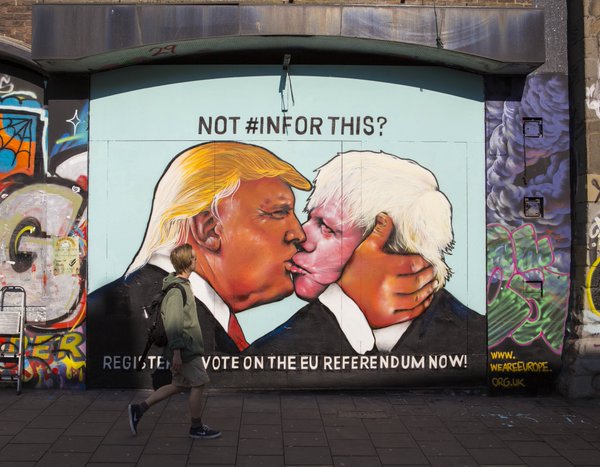 The point of departure is that of Nature’s determinism and the negation of human agency. Spinoza denies that humans act from freewill. In so far as we are part of a connected whole (God, or Nature), humans necessarily are subject to determination from external influences. Nothing is contingent, but is rather the logical outcome of an infinite chain of causes and effects (I p28). We only believe ourselves to be acting from freewill because we remain ignorant of the causes of our determination (III p2s). This necessary relation to external causes means that we are constantly subject to affects, modifications of our bodies and minds, which can be positive for us, negative, or neutral (III d3 and post. 1). These instances, by which we undergo changes that we neither control nor understand, are called passions. So long as people are led by passions they can be contrary to one another (IV p34), as they are affected differently and have different desires. Such disparity of desire is the source of conflict, hatred, fear and so on (see part III for full elaboration of the affects). Importantly, the passions do not have to be based in truth – it is enough that we imagine or associate something with a positive or negative impact on us, and are thereby affected by it ‘accidentally’ (III p15).

Using Spinoza’s logic, and the above account of conflict, we can develop an explanation of the forces at play within political divisions such as those surrounding Brexit and the US election. People are differently affected by the idea of the EU, or of President Trump. Thus there is a conflict of desires, and so citizens are contrary to one another; hence the anger and blame. Considering  additional factors such as immigration, race, and class, it can be seen that there are multiple grounds from which passions can lead people in contrary ways. ‘Post-truth’ – the increased influence of emotion, rather than facts, on public opinion – may have been declared the official word of the year (Oxford Dictionaries, 2016), but for Spinoza there never yet has been a time of rational Truth, and so politics has always been ‘post-truth’, driven by passions and not reason.

Considered from this position, Brexit, Trump, and the political discord associated with them, are unfolding precisely according to the laws of Nature, and could not be otherwise. However, recognising this does not mean we should be resigned to apathy. In fact, for Spinoza, it is precisely through understanding the natural causes of affects that we can moderate the extent to which we are led by passions, and so reduce hatred. Whilst we cannot remove ourselves from the system of Nature’s determination, Spinoza claims that following the guidance of reason can restrain and moderate the affects. To demonstrate: if I perceive myself as negatively affected by another, passion leads me to hate them. Yet if I recognise that the object of my hatred is not self-subsistent, but rather part of an infinite network of effect and cause, then the affect is lessened (V p6). I have not extracted myself from the system of determination – I have still been affected with sadness by an external cause – but if I follow Spinoza’s guidance, I will see that to respond with hatred does nothing for my well-being. Thus affects cannot be eliminated, but they can be understood (V p4). Wisdom lies in this endeavour to clearly understand ourselves and our emotions, and doing so reduces the extent to which we are led by passions.

Extrapolate this to the political divisions of Brexit and Trump, and the task is to use reason and understanding to temper the passions through which each side mocks, disesteems, and hates the other. Rather we must strive, as far as we can in each case, to get a clear understanding of the causes, and not to fall into two camps, each considering the other to be bad. Things are not good or bad in themselves, we only judge them as good or bad as far as we perceive them as positively or negatively affecting us (IV p8). Ultimately, for Spinoza, if everyone was to follow reason then each person would “seek for themselves the common advantage of all” (IV p18s). We necessarily require external bodies to preserve our being (II post. 4), and nothing is more useful to us than our fellow humans for doing so. Our utility to each other is maximised as far as we can follow reason and agree in nature (IV p35), rather than being moved by passions whereby we are contrary to one another. To take such a sensibility into our analyses and understanding of Brexit and Trump would be a way towards overcoming blame and animosity.

An immediate problem with the above schema is that it seems to require that people know and understand it before the benefits will be forthcoming. Even with some grasp of the text, the ethical standard set is jolly high, prescribing cool contemplation in the face of all that life throws at us. Spinoza himself acknowledges this difficulty – “for if salvation were at hand, and could be found without great effort, how could nearly everyone neglect it?” (V p42s). Perhaps, in light of this, Donald Trump and Theresa May should both order the distribution of a free copy of the Ethics to every citizen…

Dearden, L. (2016) Donald Trump says his election victory would be ‘Brexit plus plus plus’ in final push for votes. The Independent [Online] Available at: http://www.independent.co.uk/news/world/americas/us-elections/donald-trump-latest-us-election-day-votes-results-rally-brexit-plus-plus-plus-north-carolina-a7404051.html

Harris, J. (2016) The reasons for Trump were also the reasons for Brexit. The Guardian [Online] Available at: https://www.theguardian.com/commentisfree/2016/nov/10/donald-trump-brexit-us