Delirium at Halftime: The real excess of the imaginary

Ollie Dawson reflects on his first year on the MSc Society & Space course and looks at the philosopher who has had biggest impact on his thinking so far – Giles Deleuze.

It took me twelve years to find my way from undergraduate study in literature to post-graduate study in the social sciences. I flirted intermittently, and more or less seriously, with applications to study publishing, arts management, philosophy and literature, psychoanalytic theory, and public policy. Each time, just as I was feeling ready to dive back in to academic study, some new thing would come along, making demands on my time or money, and I’d put the idea to bed for another year or so.

Then, last year, it became clear for several reasons that I would be leaving my job, moving from London to Bristol, and beginning a new life. The desire to return to study was reawakened, only this time it was distinctly achievable.

As someone now halfway through doing the thing they’d supposedly wanted to do for ages, but couldn’t, the nature of desire – its emergence, intensity, perpetual deferral and shape-shifting potential – is of interest to me. Why did I desire to return to academic study? Perhaps to gain knowledge and skills; to offset years of the daily grind; to open up possibilities for new ways of being; to indulge in a spot of nostalgia – revisit my student self; to bore my friends at the pub forever more?

Having read a fair few novels, stories and poems over the years, I had my ideas too about what social science was. It almost certainly involved surveys and observation of people that would develop evidence for this particular policy or project, or help solve that particular social problem. This was what I was going to study. Yet, once the course began, what I quickly discovered was that I would be routinely pushed to the limits of my ability to think about the deepest most fundamental questions of being. This in itself was shocking not only in the context of many years of deferring post-graduate study, but also because I acutely felt the sensation of being stripped of the comforting prism of artistic expression, characterisation, textuality and form, through which I had previously explored such questions in fiction and poetry. I had become a complacent reader of literature and, as if on a daytrip, the too-casual literary reader can always just hop back on the tour bus when they’ve had enough and pootle to the next destination. Philosophy, however, is a naked confrontation with the world. It is awkward, intense and relentless. It lacks the context of literature and so its prosaicness demands of you that you do something. This was my second shock: to discover how much I enjoyed doing it.

And so to venture my pitch for the MSc Society and Space course – should anyone reading this be considering applying – I want to look briefly at one thinker who has been central to my first year on the course, and who has in recent years given significant theoretical energy to the study of human geography. That thinker is Giles Deleuze. In the years leading up to his death in 1995, Deleuze agreed to be filmed being interviewed by former student and long-term friend and collaborator, Claire Parnet. The result, Giles Deleuze: From A-Z, is eight hours of unexpectedly engrossing footage of Deleuze talking about his life and philosophy, as he and Parnet journey through the alphabet from A-Z, each letter corresponding to a word as shown below:

If you are thinking about studying on the MSc, Deleuze is an unavoidable presence. His bibliography is prolific and overwhelming, yet here in just 8 hours, there is something of a distillation of his life’s work that can give you a flavour for how he thinks and how you are likely to either be invigorated or repulsed by the inevitable encounter with him. The full unedited film is available with subtitles on DVD and, presently at least, can be found on Youtube.

The excellent DVD liner notes include an interview with Director, Pierre-André Boutang, in which he goes into detail about the filming, describing the decisions taken around not to use cutaways and how to frame Deleuze: ‘In ten or twenty years, what will people be interested in? Seeing Deleuze’s face of course. They’ll be annoyed if the camera moves to the hat’ (Aubron et al. 2012, p.5). Equally interesting, is the decision to let each 11min reel of 16mm film run to the end to avoid intruding upon Deleuze’s verbal flow. Combined these decisions give the piece its own rhythm and make it purposely impossible to edit without a jump. Boutang elaborates:

‘And the charm of 16mm film is that the sound reel lasts longer than the image. With some people you cut once the image stops. You don’t feel like doing that with Deleuze. You don’t cut a solo in the same way, it’s like jazz. If you are filming Charlie Parker, you keep the sound even if the image stops, you let it roll, because what he’s doing there, he can of course do it again, but it wouldn’t be the same.’ (ibid p.7)

Here we have, as Boutang puts it, Deleuze ‘in the aquarium, he has chosen the water of his aquarium, and he does what he wants’ (ibid. p.8). Prospective students of the MSc beware: you will be a mere crustacean in the aquarium tank of the Deleuzian whale. Given that this is where my desire to return to study has brought me, I’ll finish by looking at what ‘the philosopher of desire’ had to say on the subject of desire itself. 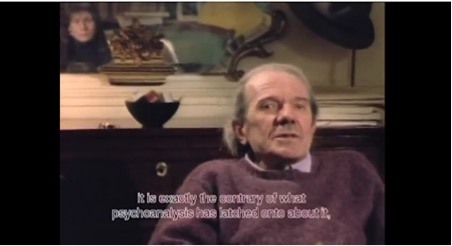 In From A-Z Deleuze talks about how, in Anti-Oedipus, with Felix Guattari, he proposes a new concept of desire. Deleuze emphasises how this concept is simple not abstract. Indeed, the whole problem with psychoanalysis, according to Deleuze, is that it extracts an object of desire. But desire is not an object; it is an aggregate, or assemblage. We must therefore pay attention to the relations of things, not the things themselves. Assemblages are those constructions (of things in particular states; of ways of talking; of territories within which we enter and leave) through which desire can flow. Freudian psychoanalysis, on the other hand, is obsessed with reducing desire to three objects: the father, the mother and the phallus.

Deleuze goes on to define three features of desire. Firstly, desire is not a theatre populated by Hamlet and Oedipus. The unconscious is rather a factory of production, incessantly producing desire. Second, delirium – which Deleuze sees as the state of desire – is, contrary to psychoanalysis, not fixated on the father and mother but interested in the whole world: ‘one delires about history, deserts, tribes, people, races, climates’ (Boutang 2012).

Thirdly, desire establishes itself in an assemblage in which several factors are at play. Yet again, argues Deleuze, psychoanalysis reduces the matter to the father, the mother and the phallus. In From A-Z, Deleuze demonstrates this with the story of the boy who witnesses a horse fall down in the street. This scene – examined in more detail by Deleuze in the (also excellent and highly accessible) collection Essays Critical and Clinical – is interpreted by Freud as meaning ‘my father makes love with my mother’ (1998, p.65). Deleuze, to the contrary, sees not the object, but the milieu of the boy in the street, surrounded by all this life and then the incident. Children are always already in this milieu, and the parents are mere occupiers; ‘openers and closers of doors, guardians of thresholds, connectors or disconnectors of zones’ (Deleuze 1998, p.62). In such a milieu, or assemblage, the horse is not an object to be interpreted, but an event among events, with trajectories and becomings. The task of psychoanalysis should not be to interpret the personal and possessive, but to identify those trajectories – out there, in the world of intensities and affects – with the potential to create something new which we can then use to our advantage. In this sense, Deleuzian ‘schizoanalysis’ is the cartography to psychoanalysis’ archaeology.

I started my year with a desire to explore something different from the imaginary world of literature. To engage seriously (as social scientists, of course, must) with ‘real things’ in the ‘real world’. Yet what has drawn me into Deleuze’s orbit of thought has been the application of his philosophy to the encounter with art. Thinking about art as consisting of maps of intensity, with trajectories and becomings, always also implies a way of living. It also elevates the question of style in an artistic work from a personal possessive quality, to something like the possibility to live otherwise. I have found that Deleuzian philosophy gives me a new way to experience literature and art, such that it folds back into my own life in powerful ways. What an unexpected delight – and not a survey in sight.